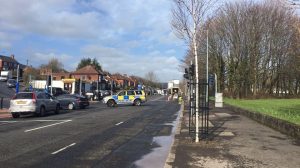 ARMY Technical Officers have defused a viable pipe bomb after it was found in north Belfast.

Police said the device was discovered in the back garden of a house in Shore Crescent shortly before midday on Monday.

They said it was moved by a resident to nearby waste ground on Shore Road where it was examined by the ATO and made safe.

The device has been seized for forensic examination.

Detectives have not yet said what motive lay behind those who left the device.