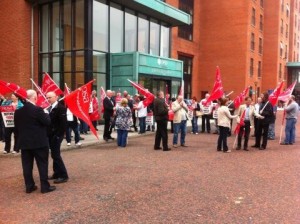 THE public sector could grind to a halt this Friday as more public sector workers across Northern Ireland say they will down pens in a strike over budget cuts and job losses.

The trade union Nipsa said it was asking members to throw their weight behind the strike.

Nipsa boss Brian Campfield said the strike was in protest against “unprecedented cutbacks in jobs and public services”.

Last week, Unison and members of the Irish National Teachers’ Organisation (INTO) voted to strike.

Nipsa said it was calling on members in the civil service and related bodies, the health service, education boards and the Northern Ireland Assembly to take part.

Mr Campfield said: “The strike action on 13 March is designed to highlight the unacceptable nature of these austerity driven cuts and to provide workers and the community in which they live with some hope that this attack on their community can be halted.”