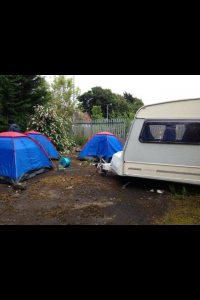 POLICE will be keeping a watchful eye tonight as several thousand loyalists are expected to turn out for 600 days of the Twaddell Avenue protest.

It is expected to be one of the biggest protests so far in north Belfast with bands, Orangemen and protesters expected to turn out to show support for their Ligoniel brethern.

In 2013, the Parades Commission banned Ligoniel Orangemen from making the return leg home past the Ardoyne shop fronts for fear of violence from dissident republicans.

The protest will celebrate two years this July 12 since the home parade was first banned.

On July 12, 2013 there was major rioting at the top of the Woodvale Road as the PSNI enforced the Parades Commission determination.