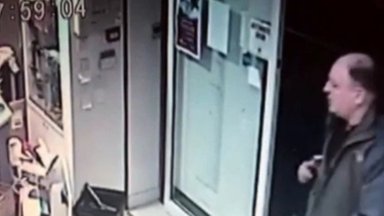 THREE people have been arrested in connection with the escape of prisoner Derek Brockwell from custody last month and who was later arrested in Belfast.

Brockwell escaped from Dublin’s Tallaght Hospital on February 17 after he was escorted there from Portlaoise Prison for a hospital visit.

Two prison officers were attacked and stabbed before Brockwell was driven away on a motorbike.

He was recaptured the next day after being tasered by PSNI officers outside Wetherspoons pub in Belfast seconds after he stabbed himself in the stomach.

Brockwell is still in custody in Maghaberry prison as the authorities wait to decide on whether to extradite him..

This morning detectives from Tallaght arrested a couple in their 50s in the Ashbourne area of Co Meath.

They are suspected of helping Brockwell escape and get across the border.

They are being questioned at Tallaght Garda Station.

A third person, a man in his 20s, was arrested at Portlaoise Prison in connection with the investigation.

The inmate was taken from the prison to Rathfarnam Garda Station.