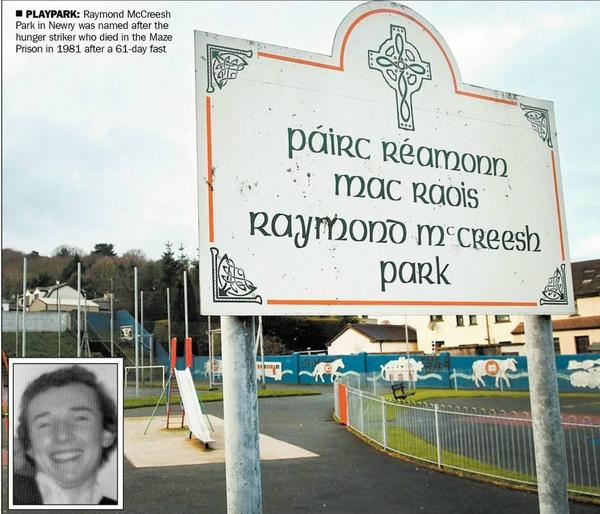 THE row over a Provo named play park rumbled on tonight.

Last month, the council’s equality committee voted by 15 to four to retain the name.

In a full council sitting on Monday night, a proposal to hold a debate to reconsider the move was rejected by 15 votes to 14 much to the fury and anger of unionists.

Council officials said standing orders would have to be suspended for the unionist motion to be discussed, but the vote meant the debate did not go ahead.

SDLP councillor Michael Carr said his party had voted on Monday for the fresh debate to be held.

“The naming of a public space, and especially a children’s park, in this way is something which has clearly caused considerable hurt to victims and survivors as well as the broader unionist and nationalist communities,” he said.

“We also recognise the hurt experienced by the McCreesh family and the pain this protracted situation will have caused them. We do not, in any way, want to add to that.

“The party politics played around these issues continues to open wounds that we should all be working to repair.”

He added: “The SDLP is clear- no public space should be named after anyone involved in state or paramilitary violence.”

In last month’s vote, those who voted in favour of retaining the name were Sinn Féin councillors and two independent republicans.

While one SDLP councillor abstained from the vote, the other eight of his party colleagues on the council did not attend.

UUP councillor David Taylor told the meeting on Monday: “I want to remind republican representatives that this issue will not go away.”