FRAMP THE CHAMP: THE JACKAL BLOWS AWAY AVALOS IN FIVE ROUNDS 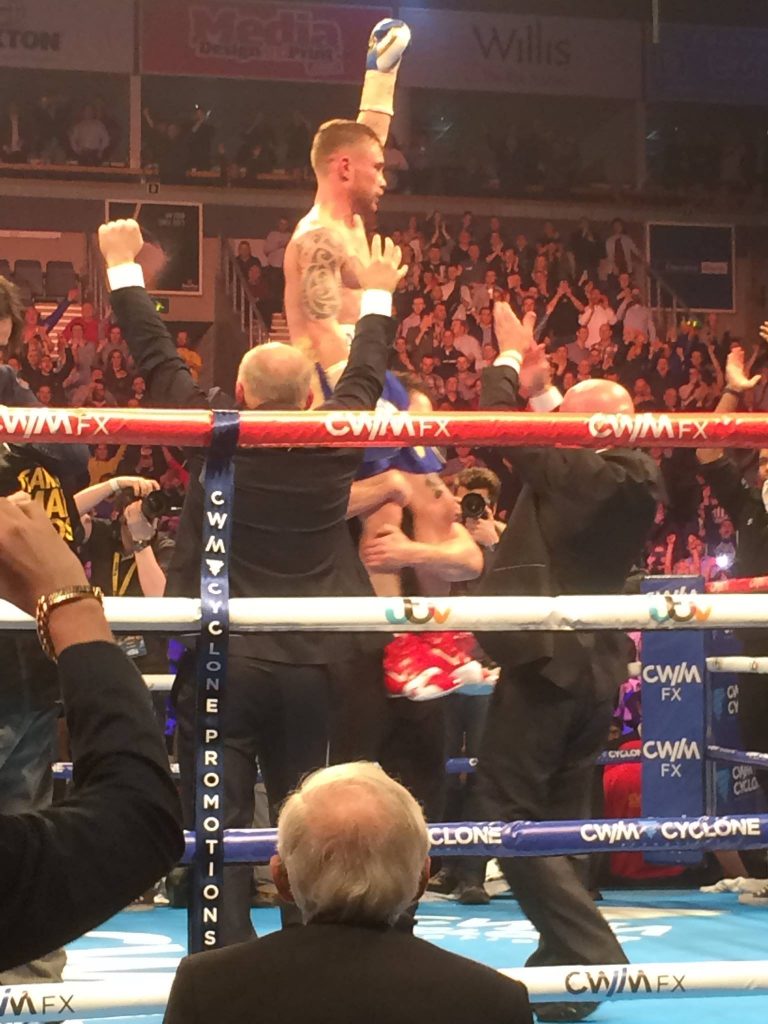 HE’S STILL THE CHAMP: Carl Frampton retains his IBF belt in front of a packed Odyssey Arena in Belfast

The IBF super-bantamweight king stopped mandatory challenger Chris Avalos in five fearsome rounds in front of a packed and passionate crowd at Odyssey Arena in Belfast.

Frampton’s straight right did all the damage and although the Californian contender kept coming forward and caught him occasionally, he dominated from the start and referee Howard Foster had no choice but to step in and call a halt.

“To be honest it was pretty easy,” Frampton toldITV1. “After the first round I knew I had him.

“He was slow, very slow. I think I hurt him with a right hand and wobbled him. He was still on his feet, so you have to give him credit.”

Frampton spent the first round finding his range and as mouthy as he was in the build-up, Avalos was game from the go and set the tone, taking the centre of the ring and trying to lead with the jab and wild body shots.

The champion though soon led the way, his right hand kept his opponent in check but also showed that neither was willing to take a step back. A left-right from Frampton stood out in the second but it was the third when the blue touch paper was set alight.

After a clinch in the corner, Avalos seemed to hurt his right shoulder and after the break, walked away, looking at his arm only for Frampton to – rightly – launch in an unseen left-hook. Avalos was stunned but managed to hang on as referee Howard Foster stepped in to break them up.

Frampton kept calm though and did not look for the finish and again the right came back in abundance, a jab barely needed, that straight slick shot being too much for Avalos to handle.

The fourth round had another moment that had the crowd on their feet with the challenger on the floor after one of the exchanges in the centre of the ring. Both missed with wild hooks, but the straight shots got the Jackal on the front foot and although a punch didn’t put Avalos on the canvas, he showed his strength by simply shoving him to the floor.

Avalos still looked a little confused as the fifth round started and this time a big left landed in Frampton’s favour and then a rare low hook followed suit and opened Avalos up for those rights to bring about the finish.

It was fast and harsh and it was one of the numerous straight rights that proved the decider, this one landing right on the temple as Avalos tried to get out of the way.

Avalos was in trouble, stunned by the latest blow, wobbled on his feet and was finally a sitting target. A barrage of shots came raining in and again it was that simple straight right that again landed time after time.

The American did swing the odd shot back in the space of a few seconds but Frampton closed in cruelly forcing Foster to step in and save a bemused and beaten challenger from any more punishment.