THE DAY OF THE JACKAL: FINAL COUNTDOWN TO FRAMPTON V AVALOS 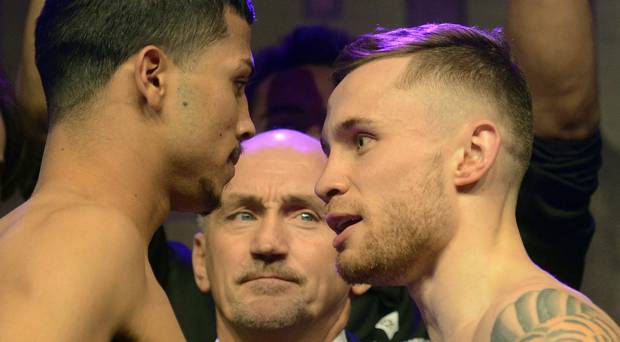 ALL the hype, all the nastiness and all the verbals are now over.

Today is fight day. Let’s get ready to rumble.

And Carl ‘The Jackal’ Frampton and Chris ‘The Hitman’ Avalos will make their final preparations for tonight’s big fight at the Odyssey Arena in Belfast.

At 11 pm tonight both fighters will step into the ring and will let their fists do the talking.

And millions of fight fans all around the world will be tuning to ITV to watch the two gladiators do battle.

Yesterday, the blood boiled over into a heavy verbal onslaught at the Europa Hotel weigh-in.

And the fans loved every single second of the angry confrontation

The pride of Tigers Bay and Belfast’s defending super bantamweight world champion squared up to Avalos after the weigh-in.

Frampton confidently made the required weight of 122lbs while Avalos had to remove his pants to come in at 121.9lbs.

After literally going head-to-head while swapping some verbal taunts, Avalos fired the opening salvo by pushing Frampton away.

As Frampton went for Avalos, their camps jumped in to split it up while Frampton’s coach Shane McGuigan stood back with a wry smile on his face.

Both fighters continued to provoke one another, Avalos beckoning Frampton on while Frampton hit back with a dismissive hand gesture that indicated that he thought his opponent was all talk.

But the champ looked properly up for the battle – again much to the delight of his fans.

The acrimony took another twist when Frampton claimed that Avalos’ mother had spat chewing gum at him.

He thanked his fans on Twitter, saying: “Unbelievable turnout for the weigh-in. Thank you for the amazing support as usual.

Frampton then tweeted: “On another note, Avalos’ mother hit me with a bit of chewing gum straight out of her mouth. Lovely lady she is.”