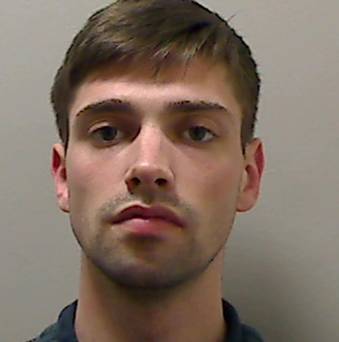 Detectives from the PSNI’s Serious Crime Branch have welcomed the jail sentence imposed on a 23-year-old Dunmurry man after he was caught with a bomb last year.

Connor Hughes, of Altan Close in  Lagmore, was arrested in the Shaws Road area of west Belfast on March 27, 2014 after he was stopped with a holdall containing an improvised explosive device.

Hughes pleaded guilty at Laganside Court on Friday to possession of explosives with intent to endanger life and was sentenced to 11 years, half of which will be in prison and half on licence.

The holdall contained a fire extinguisher, home-made explosives, a detonator and command wire.

Detective Superintendent Kevin Geddes, from Serious Crime Branch, said: “Police action on that night last March undoubtedly saved lives, most probably the lives of our police colleagues who were working to provide a service in the area to the local community.

“But the community itself was also put in danger of death or serious injury because of the highly unpredictable nature of these improvised explosive devices.

“The community is safer today as a result of this young man’s imprisonment. While we welcome the sentence, it is a matter of concern to see a man as young as 23 become involved in such criminal activity and waste his future behind bars.

“Police will continue to seek to divert young people away from such criminality by working with partners in the criminal justice system and the community with the overall objective of keeping people safe. We would ask that people continue to work with us and provide information which helps keep everyone safe. ”