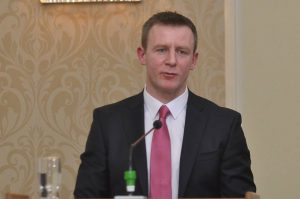 SDLP Newry and Armagh representative Justin McNulty has expressed his utter disgust as a booby trapped device injured a man in Crossmaglen yesterday.

The former GAA player is to stand in May’s Westminster election in an effort to wrestle the seat back from Sinn Fein.

Justin McNulty said this morning: “I condemn without reservation such mindless activity.

“There is no place for Lynch Law in south Armagh or anywhere else for that matter.

“It was wrong in the past and is wrong now.

“I urge the local community to be vigilant at this time and to report any suspicious behaviour to the PSNI.

“The people of Crossmaglen do not want to live in the shadow of men of violence.”