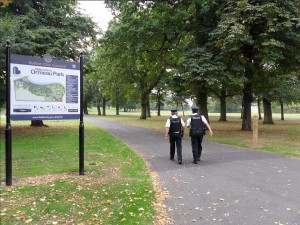 POLICE have finally carried out a major operation against gangs selling drugs in south Belfast parks.

It follows revelations in a Sunday newspaper within the past six months that Lithuanians and Latvian criminals were behind the deadly trade.

The operation has been concentrated mainly in Ormeau Park and Botanic Gardens in the south of the city.

But the trade was highlighted on the front page of a Sunday newspaper on at least TWO occasions.

And it even named and shamed the main dealer who was openly selling the killer drug on the street.

In south Belfast this month, police have made 27 arrests in connection with drugs offences in the area so far this month.

“It’s been very successful in dismantling and disrupting the organised crime gangs that are behind this.

“Seventeen people have been charged for the supply of class A drugs as well as money laundering.

“We’ve seen an increasing amount of heroin – it gives us most concern.”

According to PSNI statistics, south Belfast topped the policing area with the most drugs seizures across Northern Ireland:

Added Chief Inspector Murdie: “Our real concern around this operation has been the organised aspect of it, and the focus of our tactical crime unit has been on those people intent on supplying these dangers drugs in the city centre.”

He said that while he was aware of “public rumour” around the involvement of foreign nationals in drug selling, there was “no specific gang of ethnic minority groups involved”.

“It’s right across the board and our own local, indigenous criminals are heavily involved,” he said.

He added that drugs came from across Europe and were brought in “particularly through Dublin” before heading onwards to Belfast.

“There are bigger drug dealers that we need to work with our colleagues in the Garda to tackle,” he said.