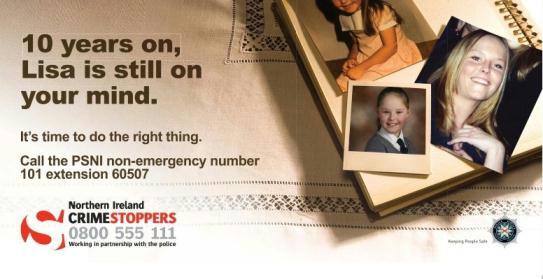 POLICE and the family of Lisa Dorrian have launched a renewed appeal for information about the missing Bangor woman in the week of the tenth anniversary of her disappearance.

The anniversary appeal coincides with a new reward of up to £5,000 from the independent charity Crimestoppers and an outdoor advertising campaign in Bangor and parts of greater Belfast.

Selected pubs and clubs will also have washroom advertising and drip mats to promote the campaign.

A video appeal made by Lisa’s family and police will be shown in a number of cinemas over the coming weeks as well as being available to view online on the PSNI website by clicking on the following link http://youtu.be/NrLv6pI6LlQ and on Lisa’s website www.lisadorrian.co.uk

Lisa, who was 25 and from Bangor, disappeared after a party at a caravan site in Ballyhalbert on 28 February 2005.

Her body has yet to be found but police believe she was murdered.

Lisa’s sister Joanne said: “As a family, we cannot express how much we want Lisa back.

“There are not enough words to show how we all feel. People cannot understand what this feels like: the not knowing, the absence of Lisa’s body, the lack of closure.

“We just want the person who knows where she is to come forward and tell us that vital piece of information which would mean so much to the entire family. We hope the offer of a Crimestoppers reward, the outdoor advertising and the video appeal will help in the recovery of Lisa’s remains.”

The investigation into Lisa’s disappearance and murder has been substantial. It has involved:

• The identification of more than 4,000 witnesses
• Taking statements from 571 people.
• 275 searches, 194 of them in caravans and outbuildings
• Eight arrests on suspicion of murder and a number of others for unrelated drugs offences.

The officer leading the investigation, Detective Chief Inspector Justyn Galloway from Serious Crime Branch, said: “This is not going away for Lisa’s family.

“There are individuals who have knowledge of how she died, and how her body was disposed of. By holding on to these secrets, they prolong a grieving family’s agony. At the same time, they are not reducing their chances of being caught. We are continuing to investigate.

“The investigation will not be concluded until Lisa’s body is found.

“Those individuals who harbour the secrets which could free the Dorrian family from their living nightmare should take no comfort from the passage of time. I would ask them to do the right thing and talk to police.”

A social media campaign #letsfindlisa is being started to help enlist community support for this tenth anniversary appeal.

Several cinemas have kindly agreed to show Lisa’s appeal video in their premises over the coming weeks.

The PSNI say detectives and the Dorrian family gratefully acknowledge the co-operation and generosity of these organisations in showing the video appeal free of charge.