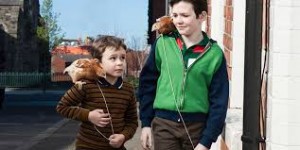 A NORTHERN Ireland based film was the toast of the celebrities after it won a Bafta at the 2015 awards ceremony.

Boogaloo and Graham, is set in 1970s Belfast at the height of the Troubles.

The filmi is about two young boys who discover the facts of life with the help of their pet chickens.

The prize for British short film went to the team of Brian J Falconer, Michael Lennox and Ronan Blaney who were delighted to go on stage and collect their Bafta award.

Northern Ireland had two reasons to celebrate at the awards.

There was also Bafta success for Shane Kelly, from Sixmilecross in Co Tyrone who left Northern Ireland for Texas in the USA to find fame and fortune.

For the past 12 years, he worked as director of photography on Boyhood, which won best film.

The Bafta ceremony, hosted by Stephen Fry, is the biggest awards event in the British film calendar.

Boogaloo and Graham has also been nominated an Oscar.

The awards in the US take place later this month