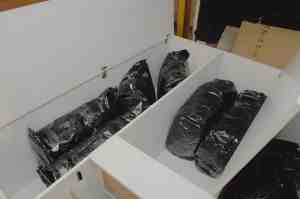 POLICE have made one arrest and seized £20,000 worth of drugs.

A PSNI spokesman said: “Last night City West Neighbourhood Police Team in Derry carried out a premises search in the Foyle Road area of the City during which approximately £20,000 of drugs were seized.

“One male has been arrested for a number of drugs related offences.”

It’s understood investigations are continuing into the find.

There was a large police presence in the area whilst the operation took place.

Residents said the police arrived quickly on the scene.

Forensic officers were also there as the drugs were photographed before being taken away for analysis.