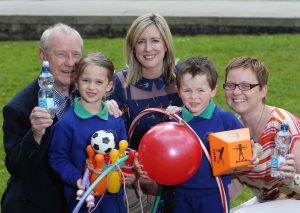 CENTRA has teamed up with Action Cancer to launch its 13th annual Health Action Awards, encouraging healthy schools across Northern Ireland to enter, for the chance to be recognised at the June 9th awards.

Schools, nurseries and colleges can enter, whether they provide healthy meal options in their cafeteria, promote extra fruit and water in school, are involved in extra-curricular exercise programmes, or run cancer awareness initiatives.

Action Cancer Health Promotion Manager Frances Dowds said: “Now in its 13th year, we are encouraging as many schools to enter the awards as possible. This is a great way to celebrate the fantastic work schools carry out throughout the year in promoting good health and well-being to their pupils.”

Nikki McDowell, Centra’s Brand Manager added: “Action Cancer’s Health Action programme includes a range of health promotion sessions for nurseries, schools and colleges which the awards reflect. Centra has proudly sponsored the project since 2003, with retailers and customers raising almost £900,000 in that time.”

The unique Health Promotion Programme has delivered healthy lifestyle messages to more than 480,000 young people since its launch 11 years ago.

Figures released by the charity reveal that cancer prevention sessions, featuring information about being fit and active, eating well, being safe in the sun and avoiding the dangers of smoking and alcohol, have been brought to more than 1,000 nurseries, schools and colleges in Northern Ireland.

Schools, nurseries and colleges can obtain entry forms by contacting Action Cancer on 028 9080 3344 or by emailing Michelle McCann at mmccann@actioncancer.org. Completed Health Action Award forms must be returned to Action Cancer by 27th March 2015 and successful schools will be notified at the end of April 2015.