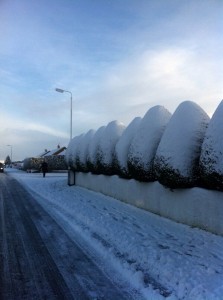 That’s the warning from the Met Office as January’s wintry conditions are set to continue this month.

The Met Office has issued a yellow warning for snow across the whole of Northern Ireland from 4pm today stretching through tomorrow morning’s rush hour to midday on Tuesday.

Last night saw wintry showers give dustings of snow in many places and sharp frost was expected this morning with some places as cold as minus five.

The maximum temperature for today is predicted to be a shivering three degrees.

The Met Office warning is for snow of between 2-5cms overnight tonight into Tuesday with an additional 10cms possible over higher ground in Northern Ireland.

A Met Office spokesman said: “Clearer weather with more scattered snow showers will follow on Tuesday and falling temperatures will allow icy stretches to form, particularly where snowfall has been wet.

“The public should be aware of the risk of difficult driving conditions and some travel disruption. A shallow area of low pressure forming near Iceland will move southeast on Monday.”