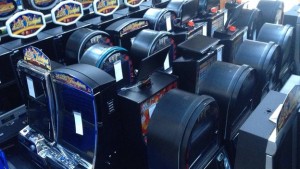 ORGANISED Crime Branch detectives investigating money laundering and illegal gambling have seized machines and cash worth more than £500,000 in Belfast and Lisburn.

Premises were raided at Shaftesbury Square and Lisburn Road in Belfast and Chapel Hill in Lisburn.

More than 100 illegal gaming machines and three casino roulette machines were seized as well as £200,000 in cash.

A 63-year-old-man from Lurgan was arrested and has been bailed to attend Musgrave police station on 11 March.

Officers from Home Office Immigration Enforcement also arrested a man in his 40s on suspicion of an immigration offence.

Det Supt Andrea McMullan, from the PSNI’sOrganised Crime Branch, said that in addition to the substantial amount of cash seized police believe the three roulette machines have a value of £100,000 each.

“We seized a further 130 smaller gaming machines which are worth around £1,000 each,” she said.

“We have worked with District policing colleagues and partners in the Gambling Commission and Immigration Enforcement to stop what we believe were premises being used for illegal gambling and money laundering.”