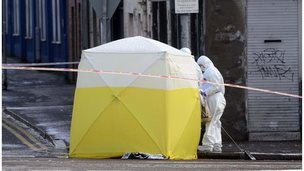 DETECTIVES from the PSNI’s Major Investigation Team believe a man found murdered this morning was brutally stabbed to death.

The victim is of Pakistani origin and not Chinese as some politicians had earlier claimed.

Police have not yet released any further details about him as they are still trying to identify him and discover his exact age.

A man arrested over the dawn-break murder is also a foreign national.

He is believed to be of African origin.

Two knives were recovered at the scene and detectives believe there was a row at a house in India Street eariler.

The suspect is currently in custody being quizzed.

A murder probe was launched after the discovery of a body found in Botanic Avenue in south Belfast in the early hours of this morning,

Detective Chief Inspector Justyn Galloway of MIT said: “The body of a man was discovered in the area of Botanic Avenue shortly after 5 am this morning.

“We are treating the death as a murder. One man has been arrested and is currently in custody assisting police with their enquiries.

“We are keen to hear from anyone who was in the area of Botanic Avenue early this morning and witnessed the incident, or anyone with any information that could assist this investigation to contact Detectives at Musgrave Police Station on the non-emergency number 101.”

The police have a forensic tent in place at the corner of Cameron Street where it meets with Botanic Avenue.

The road is closed from University Street to Shaftesbury Square and is expected to be for some time.

Translink has said that Botanic train station is also closed. Trains are running through the station but are not stopping.