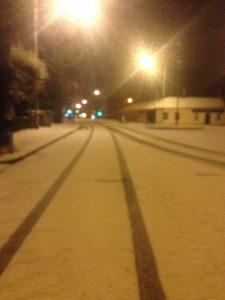 The Ormeau Road this morning after snow flurry

Police are warning drivers to slow and take extra care on the roads because of the condition.

The PSNI are advising motorists to leave more room to stop than usual and brake gently to avoid skidding.

“Drive slowly on snow in the highest gear possible,” a PSNI statement said.

“Do not assume your vehicle can handle all conditions. Even four-wheel drive vehicles can encounter trouble on winter roads,” it added.

An accident has just been reported on the Castleblayney Road in Cullaville, Co Armagh.

And Belfast City Council has just announced that Belfast Zoo is closed today to the public because of the weather.

A Met Office amber warning of snow remains in place, valid until 11:00 GMT on Thursday, with some morning rush-hour disruption expected.

A number of Translink Metro bus services are affected due to the weather.

There have also been some school closures.

Transport NI said that strong winds are also likely to combine with the snow to make conditions more difficult.

It said salting and ploughing operations are continuing across the province during a busy 24 hours for staff.

Places in the south east of Northern Ireland that do not have much snow will still be bitterly cold and will be at risk of ice, forecasters have said.

The cold weather will continue throughout Thursday and it will remain very cold until the beginning of next week.