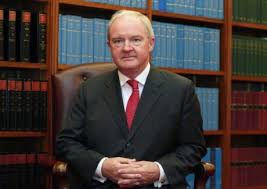 NORTHERN Ireland’s most senior judge has today warned that up to ten courts are facing the chop over budget cuts.

The Lord Chief Justice said in a statement that the budget of Northern Ireland Courts and Tribunals Service (NICTS) is no longer ring fenced or protected from cuts to its services.

Two courts – Bangor and Larne – have already been closed down.

A further eight are under threat, including Ards courthouse with business being transferred to Downpatrick Courthouse.

Sir Declan Morgan he was “significantly concerned” that the cuts would impact on “access to justice”, particularly for vulnerable victims and court and tribunal users.

He said the NICTS had delivered cuts of £23.3m over the last four years.

“The Department of Justice has a statutory duty under section 68A of the Judicature (NI) Act 1978 to provide an efficient and effective system to support the courts and to provide appropriate services to do this,” he said.

“I recognise that the public finances require tough, sometimes even undesirable choices to be made, but this statutory obligation is designed to reflect one of the basic governance principles in a democratic society.”

‘Sir Declan said the cuts to date had already had an “adverse impact” upon access to justice.

“In November 2014, a further round of in-year cuts led to NICTS temporarily closing Old Townhall Courthouse in Belfast and moving court business to Laganside Courts.

“While I appreciate that NICTS would not have been able to make the level of cuts imposed on it without closing courts, it has not been without difficulties.”

He said the cuts being imposed in the 2015/16 budget were going to create further problems.

“NICTS will shortly be issuing a public consultation on the closure of up to eight further courthouses,” he said.

“This would see the number of courthouses in this jurisdiction reduced from 22 to 10 – a reduction of 45% since 2013.

“There is a high degree of uncertainty whether courts will be able to operate effectively with this number of venues.

“The proposals will certainly place a strain on the remaining courts and will make the experience of coming to court for victims, witnesses, claimants and defendants very uncomfortable.”

Sir Declan said it was not just courts that were being affected.

“NICTS have reduced the budget allocated to a number of tribunals resulting in a reduction in the number of days that the tribunal can sit to hear cases,” he said.

“Persons attending tribunal appeals can be among the most vulnerable in society and, as legal aid is not available, they are largely unrepresented by solicitors or barristers.”

Sir Declan’s statement added that it was “difficult to see where the cuts will lead”.

“Our justice system is no longer ring-fenced and we won’t have the cushion of the funding package that was put in place on the devolution of justice,” he said.

“The minister of justice has clearly stated that his priorities are to protect frontline policing and other frontline areas as far as possible.

“It is critical that courts and tribunals are recognised as a frontline service and that the Department of Justice fulfils its statutory obligation for the protection of the vulnerable adults and children who need vindication of their rights.”

The Department of Justice is also proposing further cuts to the legal aid budget administered by the Legal Services Commission.

It could put the Department of Justice on a collision course with the Law Society, who