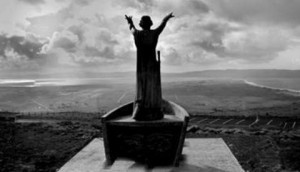 THIEVES who made off with a statue of a Celtic god left a cross behind them – and a message with the Commandment: ‘I am the Lord Thy God, They Shall Not Have Strange Gods Before Me’

PSNI officers say they believe those who stole the £6,000 Manannán Mac Lir statue from Binevenagh mountain near Limavady were driven by Christian religious zeal…clearly forgetting the Commandment: ‘Thou Shalt Not Steal’

PSNI Chief Inspector Alan Hutton said officers were investigating a religious aspect to the crime which would have involved heavy gear to remove the statue – part of a statue trail across the borough.

Mayor Alan Robinson of the DUP condemned the thieves.

“I have brought people here myself to see the statue and the incredible view over the Foyle. It’s an act of wanton vandalism,” he said.

The sculpture of the Celtic god of the sea was created by Game of Thrones sculptor John Darren Sutton and has been overlooking Lough Foyle since 2013.