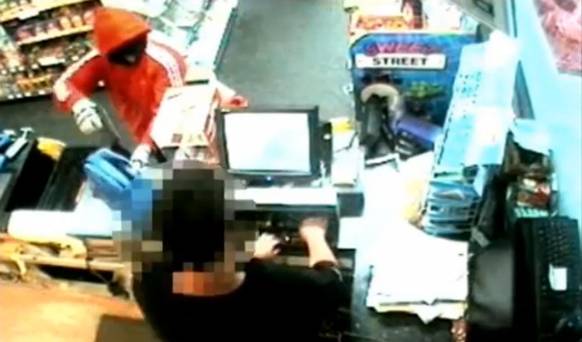 THIS is the shocking moment a violent and gun-toting criminal robbed a filling station as a young child stood just inches away.

Carrickfergus man Robert Cameron was on Tuesday jailed for robbery and possession of a firearm.

In CCTV footage released by police, Cameron can be seen threatening a shop worker and a member of the public with a handgun.

The young boy was standing beside the cash desk when Cameron began to wave his gun around but was whisked to safety by a member of the public.

The 41-year-old, from The Hollies in Carrickfergus, robbed the premises on the Hillsborough Road in Carryduff on July 31, 2013.

CCTV footage of the robbery shows a figure in a red hooded top produce a gun from a blue bag, which the shop worker is then ordered to fill with money from the till.

A member of the public can be seen lifting the child and carrying them away from the robbery in progress.

Cameron was sentenced to six years for robbery, three of which will be served on licence.

He will also serve a five-year concurrent sentence for the possession of a firearm.

PSNI Chief Inspector Derek McCamley said this was a “terrifying experience” for those on the premises. He added: “This sentence should serve as a warning to deter others from committing such crime.

“The hard work of the officers involved in this investigation has led to this person being brought before the court and dealt with in this way.

“I hope that this provides reassurance and confidence in the community that police are proactively tackling crime in the Castlereagh area and bringing those responsible to justice.”