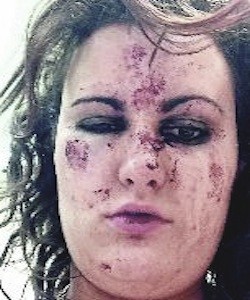 THESE were the horrific injuries suffered by a Catholic girl who was knocked unconscious in a brutal sectarian attack.

Gemma Hasson says she was knocked out on the dancefloor of a bar and then carried outside, where she was again assaulted, along with her boyfriend.

The PSNI appealed for information at the time of the incident; but shocking details have emerged via Cllr Paul Fleming.

Gemma suffered serious cuts and bruising to her face and body as well as internal injuries which caused her to pass blood for two days.

Her boyfriend sustained a broken nose in the attack. It was the second time she was targeted in just over a year.

“I’m too afraid to remain here now and I’m moving out back to Eglinton where I grew up,” she said.

In September 2013, Ms Hasson suffered torn tissue to her hand when she was assaulted by the same man, who she said called her a ‘Fenian’.

On New Year’s Eve, the same man approached her while in the pub in Claudy with friends.

“He just lifted his fist and hit me on my eye and knocked me out. When I woke up I was lying in a heap outside,” she said.

“As we walked away we were approached by the same attacker and another man. He called ‘that’s him’ and the other man punched my boyfriend and kicked him on the ground. They started to kick him in the head so I curled up over him to stop them,” she said.

“The next day I was very sore and they must have kicked me in the back because I was passing blood for a couple of days.”

Derry Sinn Fein councillor Paul Fleming said that anyone with information about the incident should come forward.

“The bottom line is two grown men attacked a young 18-year-old woman. They must be brought to justice,” he said.