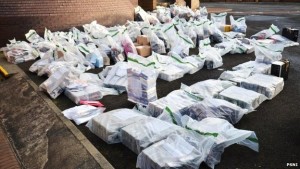 The haul of DVDs seized by police during planned raids in Lisburn. PIC: PSNI

POLICE have seized a “vast amount of fake DVDs” worth tens of thousands of pounds during planned searches of two houses.

Three people were arrested and questioned about the seizure which was made at the houses in Braithwaites Road and Edgewater Road on Friday in Lisburn, Co Antrim.

Lisburn police boss Chief Inspector John Wilson said: “The haul could have made criminals as much as £80,000.”

He said the counterfeit DVDs were suspected to have been shipped in from China.

Uniformed officers, PSNI financial investigators, staff from Trading Standards and the Federation Against Copyright Theft (FACT) were all involved in the intelligence-led  operation.

Police inquiries are still continuing into the racket.