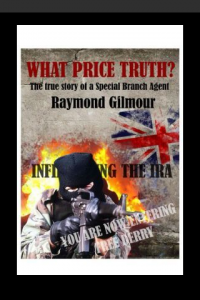 A BOOK by former IRA supergrass is back online for sale after it was taken down due to a legal threat, we can reveal.

The book – What Price Truth? – was temporarily withdrawn from sale on Amazon after Raymond Gilmour publicly named the woman who provided the weapon used to murder census worker Joanne Mathers.

Following discussions between Gilmour’s legal team and a solicitor acting for the woman, her name has now been removed from the book in a new updated online version.

A source said: “The new updated version is back online.

“It was a minor hiccough but the matter has now been resolved.

“The book was selling extremely well up until this legal problem arose.

“We expect a lot more people will buy it now that it is back online.”

Gilmour still plans to name the woman who provided the murder weapon when he is interviewed by detectives from the PSNI’s Terrorist Investigation Unit (TIU) at a police station in England in the coming weeks.

Gilmour is currently working with trusted ex-security force members both in Northern Ireland and the UK in an effort to have McGuinness indicted for IRA terrorist offences.

The group was founded by an ex-RUC man and set up to investigated McGuinnness’s role IRA murders after the PSNI initially refused to get involved.

He was instrumental in the book project coming to fruition. 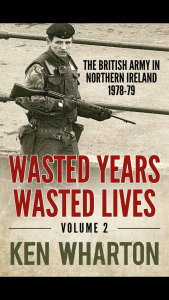 Wharton, who served with the Royal Green Jackets, is currently putting together a new book due out in 2016.

The book will look at role of the IRA’s Internal Security department.

His current book available to buy on Amazon, ‘Wasted Years, Wasted Lives Volume 2’, deals with the British Army and its role in Northern Ireland between 1978 and 1979.

Raymond Gilmour says he has little love for his former IRA commander in Derry.