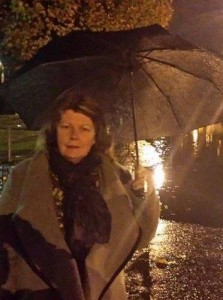 FIRST it was the snow, now its the rain that is badly affecting parts of the North West.

Overninght Derry was taking the full force of Storm Rachel as it swept in from the Atlantic.

There is widespread flooding in both the city and the county today as thawed snow mixes with rain to leave roads in a dangerous state in many areas.

The PSNI has issued an urged roads warning to motorists – closing the Foyle Bridge in Derry due to winds of up to 80mph.

Flooded roads are hitting many parts of the city, with the old Letterkenny Road particularly bad. Cllr Patricia Logue, pictured, visited the area in the early hours.

The road is now closed due to fallen trees.

The Ardlough Road has also been closed.

The Leckpatrick Road, Strabane, has been closed due to a fallen electricity pole. Motorists are advised to find an alternative route.

“The public should be aware of the risk of localised disruption to transport and possibly power supplies. This is an update to extend the warning area southeastwards across the rest of Northern Ireland where there is the risk of spell of gusts 60-70 mph later this morning.”