BELFAST-BASED SHORT FILM BOOGALOO AND GRAHAM UP FOR AN OSCAR 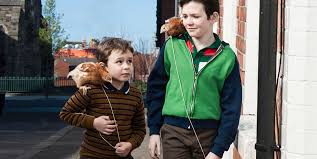 A short film set in Belfast in the 1970s, Boogaloo and Graham, has received an Oscar nomination.

The film, directed by Michael Lennox, received its nomination in the live action short category.

Boogaloo and Graham is about two young boys who discover the facts of life with the help of their pet chickens.

Director Michael Lennox said: “It is really overwhelming and such an honour for all the cast and crew involved to be recognised by the Academy.”

The short film was written by Ronan Blaney and produced by Brian Falconer.

Another NI film, SLR, was selected for the Academy Awards long-list in the same category but was not chosen to compete at the Oscars next month.

The Academy Awards will be held next month in Hollywood.