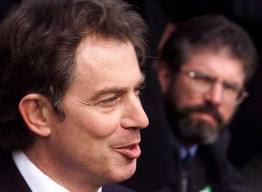 TONY Blair is due to give evidence to MPs this afternoon in London who are investigating the controversial On The Runs scheme.

Over 200 IRA suspects received get-of-jail free letters from the NIO telling them they were not wanted by the police.

The OTR scheme hit the headlines in February last year at the Old Bailey trial of Donegal republican John Downey who was charged over the 1982 Hyde Park bombings.

His trial collapsed when it was revealed he had a letter from the NIO saying he was not wanted by the PSNI or any police force in the UK.

Tony Blair’s Labour goverment set up the scheme in 1999 at the behest of Sinn Fein.

At Westminster, the Northern Ireland Affairs Committee is conducting an inquiry into the scheme, and hopes to publish its findings before the end of this month.

It has heard evidence from senior police officers and politicians, including Northern Ireland Secretary Theresa Villiers and a number of her predecessors.

The committee wrote to Mr Blair twice and emailed him several times asking him to identify a suitable date for an appearance.

He replied by saying his busy schedule meant he was unable to do so.

In November, committee chairman Laurence Robertson MP wrote to Mr Blair, accusing him of being disrespectful to the House of Commons.

However, the situation changed dramatically last week when House of Commons Speaker John Bercow phoned Mr Blair and urged him to give evidence to the MPs.

Mr Blair agreed the following day but said he could only spare one hour out of his busy schedule to be questioned by MPs.