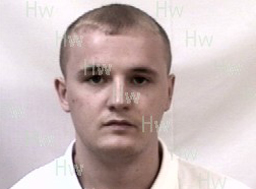 On the run murderer Patrick Byers hands himself into prison authorities

A convicted murderer had gone on the run from Northern Ireland’s top security jail is back behind bars.

The Prison Service has confirmed that Patrick Byers handed himself into Maghaberry jail on Monday night.

It came just hours after he had gone on the run from the Co Antrim prison.

The 29-year-old had failed to return yesterday morning during a “phase 3” release programme.

He was the third murderer from the jail to be unlawfully at large in the past two months.

Killer Samuel McKinley is still at large while William Sloan, who was serving life for murder, was later tracked down to Manchester and was returned to prison.

In February 2005, he and his brother were jailed for life for beating to death their neighbour nearly two years earlier.

John Byers, 23, of Antrim Road, must serve at least 16 years of a life term and his brother Patrick, 20, of Glenveagh Drive, 12 years.

Their victim, 35-year-old Kieran Kelly, was beaten with a hammer, punched and kicked to death in front of his girlfriend in their Antrim Road flat.

The brothers were high on drink and drugs when they carried out the murder.

After the sentencing at Belfast Crown Court, Mr Kelly’s girlfriend Karen McSorley, who was also attacked by the brothers, said “they took pleasure in what they were doing and left the flat triumphantly”.

She said they “just didn’t murder Kieran, they horrifically slaughtered Kieran. I watched and then they tried to kill me as well”.

Ms McSorley said she would have liked to have seen the brothers getting higher sentences because of the gravity of the attack.

Neither of the killers knew their victims when they confronted them in their upstairs flat on 2 March, 2003.

Mr Kelly had moved into the flat above John Byers just three days before the attack.

Mr Justice Coghlin said it was difficult to imagine the feelings and emotions that must have been experienced by Mr Kelly and Ms McSorley when confronted by the brothers.

He said John Byers launched an attack on Mr Kelly with the hammer, his fists and feet, “that was brutal, persistent and unremittingly violent”. His brother then joined in.

The judge said that he recognised Patrick Byers had not gone to the flat with hostile intent and had tried to restrain his brother.