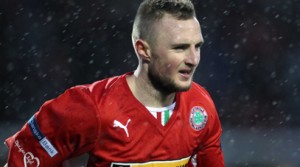 CLIFTONVILLE lifted the first silverware of the Irish football season with a 1-0 win over Bangor.

Jude Winchester was the difference between the two sides with a a first-half goal at Solitude tonigth to lift the Co Antrim Shield.

Winchester scored with a close-range finish on 15 minutes from a Jay Donnelly cross.

Joe Gormley almost made it 2-0 but he seen his right-foot shot well saved by Seasiders keeper Darren Gibbons.

But it wasn’t all one-way traffice.

In the second half, Bangor’s Andy Hall hit the inside of the post with a spear-like drive.

It was the third time current Premier League champions Cliftonvillie have won the Shield over the last seven seasons.