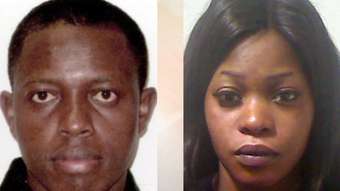 FIVE members of a sham marriage gang have been jailed.

The wedding did not take place as it was stopped by Home Office criminal investigation officers.

A sixth member of the gang has “gone missing”, a defence lawyer said, and a warrant has been issued for his arrest.

N’Diaye and fellow French nationals Massiame Bamba and Ben Doumbia as well as Nartey and two other Cameroon nationals Elvis Asaah, and Joseph Vutung, were each charged with conspiracy to facilitate a breach of UK immigration law.

Downpatrick Crown Court heard that all six conspired to set up a sham marriage between N’Diaye and Nartey.

N’Diaye admitted that she knew the proposed wedding was a sham and that she was being paid for her role as a bogus bride.

She had been recruited just two days earlier when another sham bride had pulled out.

The investigating officers established that N’Diaye and Nartey had met each other for the first time on the morning of their “wedding” and that neither spoke the other’s language.

Five of the six had flown into Belfast on the morning of the wedding, travelling from London, Cardiff and Manchester with tickets bought by Nartey.

The court heard the other defendants had all been recruited by him to find a bride, arrange the wedding and, in turn, act as witnesses.

He had been motivated by the fact that his UK work visa was about to expire.

While N’Diaye confessed straight away, the “groom” initially tried to deny the wedding was a sham.

Asked why he had travelled to Newtownards in Northern Ireland to get married, he said it was because he liked the name “Ards”.

Eventually, however, he admitted that the wedding was a sham and that it had been commissioned by him.

A defence lawyer said Nartey would face persecution if he returned to Cameroon and claimed that his brother had been “murdered” by the police in that country in 1990.

Nartey was jailed for two years and N’Diaye for six months.

“Last year, we intervened in more than 1,300 sham marriages – more than twice as many as the year before,” he said.

“We are making it even harder for criminals by building a system that is fair to British citizens and legitimate immigrants, and which cracks down on those who flout the rules.”

Liam Byrne from the Home Office said it had been a “complex investigation”.

“The individuals who have attempted to abuse our immigration laws and marriage system are now behind bars.

“It should serve as a warning to anyone thinking of getting involved in similar criminal activity that the Home Office is cracking down on all forms of immigration crime. Those who seek to cheat immigration laws face prosecution and conviction.”