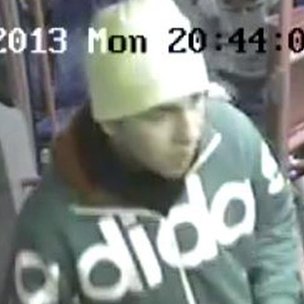 THIS is the man police want to speak to about a hoax bomb alert in Belfast city centre.

Detectives have issued his picture in the hope members of the public will be able to identify him.

He is being hunted after an object made to look like a pipe bomb was placed in the Donegall Square West area on 10 December, 2014.

During the security alert, attended by Army Technical Officers, Upper Queen Street and Donegall Square West were closed to traffic and pedestrians.

After examining the device, ATO said the object was an elaborate hoax device.

Police want anyone who can identify the man in the picture to contact CID at Musgrave station on 101.

Or alternatively information can be passed anonymously through Crimestoppers on the freephone 0800 555 111.