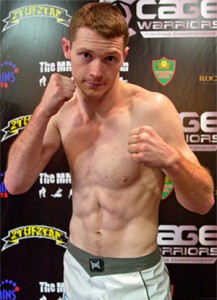 The lean, mean fighting machine from Burtonport, Co Donegal, has only returned to Cage Warriors in August having become disillusioned with the sport in 2011.

Duffy tried his hand at professional boxing and had a perfect record of 7-0, before being enticed back into MMA by Cage Warriors who offered him a lucrative six-fight contract.

Duffy’s return to Cage Warriors was welcomed by MMA fans who were massive supporters of the explosive Duffy in his formative years in the sport.

It was hoped that if Duffy could be successful in Cage Warriors he could use it as a stepping stone to break into the UFC market.

However, nobody could’ve have expected that after just SIX months back, Duffy has earned himself a sensational deal.

UFC officials have been in negotiations with Cage Warriors for quite a while about securing the signature of Duffy, who they expect to be a valuable commodity in the growing Irish MMA market.

Duffy’s signature now increases the Irish presence in the UFC, it’s reported the Burtonport man penned a lucrative contract with UFC officials who negotiated the deal.

The UFC hope to give Duffy his debut in the octagon in March or April. No further details are available just yet, but all we know for now is that it can’t come quick enough.