JOBS BLOW AS 50 POSTS ON THE LINE AT BELFAST STORES 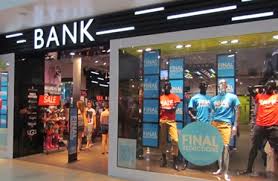 FEARS are growing for the future of up to 50 jobs at two Belfast retail stores.

Up to 23 staff could now lose their jobs at fashion retailer Bank, after the UK firm went into administration on Monday.

A further 25 workers face an uncertain with the closure of Currys in Donegall Arcade in Belfast city centre.

Bank has one store at Victoria Square in Belfast, which remains open.

Yesterday, it became the first post-Christmas high-street retailer to hit the financial buffers and collapse amid poor sales.

Deloitte was appointed as administrator, after a review of the business determined that a ‘solvent turnaround would not be possible’.

Bank was sold by JD Sports to investment firm Hilco Capital in November, and has been offering discounts of up to 70% as it attempts to attract shoppers in the face of fierce competition.

Bill Dawson of administrators Deloitte said the company has already been approached by several parties “who have expressed an interest in the business”.

“The administrators are trading as a going concern with a view to progressing these options and seeking further interested parties for some or all of the business.”

Deloitte said stores were open as usual and no redundancies had been made.

The firm said that additional sale discounts will be brought in later this week.

The bad news for the high-street comes as electronics retailer Currys is set to close its flagship Belfast city centre store – with around 25 jobs now at risk.

It’s understood the outlet in the heart of the city is to shut its doors towards the end of February.

The firm could not confirm whether the Belfast jobs would be lost as a result of the store’s closure.

Currys is owned by Dixons Carphone – the parent company formed by the merger of Dixons Retail and Carphone Warehouse.

Alana Coyle of commercial property firm CBRE confirmed the UK-wide retailer would not be renewing its lease. “It is a shame to see them close but their store format is more suited to out of town than city centre,” she said.

Owners haven’t ruled out a future smaller store under its new moniker of Dixons Carphone.

It’s not yet clear whether Belfast staff could be offered positions at other out-of-town branches still operating.