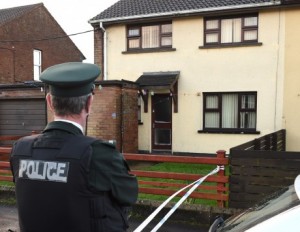 FOUR men have been arrested over a gun attack on a family home last week.

Several shots were fired into the rear window of the house at McClay Park in the Hospital Road area of Omagh, Co Tyrone, last Thursday night.

Seven members of a family aged between 18 and 53 escaped injury but were left badly shaken by the attack.

The four men were detained after searches of two properties on Monday.

Two of the men are aged 20. The others are aged 22 and 26. They were questioned on suspicion of attempted murder, but were released on bail.

However, the men have been charged with a series of alleged offences in Omagh in November.

The four are due to appear before Omagh Magistrates Court this morning.

Police are continuing to investigate the link between the offences and last week’s gun attack.