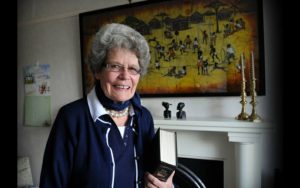 A ‘Good Samaritan’ missionary who was shot twice and wounded in Congo is in a stable condition in hospital.

Maud Kells, 75, from Cookstown, Co Tyrone, was hit twice in the shoulder by burglars who stormed her home in the village of Mulita.

The shooting happened just days after she was awarded the Order of the British Empire (OBE) in the New Year Honours List for her chartiable work.

She has been working Africa since 1968, spending half the year at home and the rest tending to the sick and needy.

Ms Kelly was a former missionary nurse but now works for the WEC International mission agency,

It says she is stable in hospital and is able to speak and recognise people and her bedside.

“Maud is a very, very strong lady. She has a very strong faith, I am sure Maud will recover although it has been a very frightening experience for her,” he said.

“In some ways, we would consider this miraculous that she wasn’t more seriously injured.”

Mr Cuthbert said the motive for the shooting was unclear, at this stage.

Ms Kells has been involved in the training of Congolese nurses in five hospitals and 30 health centres.

She also engages in bible school teaching, supervision of construction projects and speaking at church services.

She trained as a nurse in Belfast’s Royal Victoria Hospital.