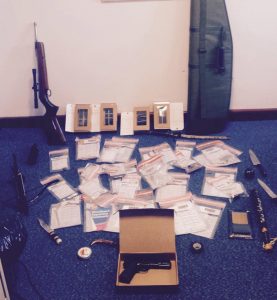 POLICE have recovered drugs, guns and knives during a planned house search in north Belfast.

A neighbourhood PSNI team from Tennent Street police station carried out the raid in the Ballysillan area.

No arrests were made but police are looking for a suspect as part of a probe into drug dealing in the area.

A NPT sergeant said: “My team and me have been in today and as well as some calls from the public like assaults, facebook disputes and neighbour disputes.

“We have been doing a house search in Ballysillan in relation to drugs.

“We found a small quantity of cannabis as well as a large number of items we have seized for examination including knives, phones, replica guns, documentation and paperwork.

“There will be an extensive investigation and one person already has been identified who will be interviewed about the matter.