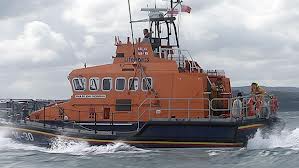 A search of the sea off the Bangor coastline resumed this morning morning after a female swimmer was reported missing.

A land, sea and air search was mounted in Co Down following a report to the PSNI of clothes being left on a pier and a person had swam out to sea.

RNLI volunteers joined PSNI officers in the hunt for the missing woman.

During the search, the emergency services recovered a bag containing clothes which had been left on nearby rocks.

But as daylight faded and searching continued by torchlight, there had still been no sign of the missing woman.

Kevin Byers of Bangor RNLI said that both the Bangor and Donaghadee lifeboats had been deployed, and were carrying out search patterns in the sea along the north Down coast.

He said his colleagues continued with their extensive search operation until the Coastguard advised them to stop for the night.

“We will be back at daybreak,” he vowed.