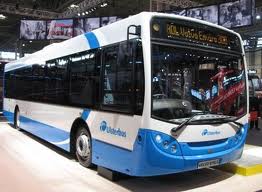 THE Health and Safety Executive has launched an investigation following the death of a woman who was knocked down by a bus.

The victim became the 80 th person to lose their lives on the province’s roads in 2014.

The accident happened at the Lisburn Translink bus depot in Smithfield Street shortly before 10.30 am this morning, December 29.

Translink confirmed that an incident had taken place and that an investigation was under way.

The HSE, Translink and the PSNI will now be trying to establish how the accident happened and who was to blame.