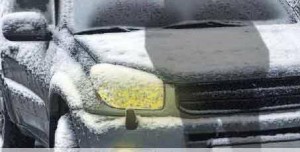 POLICE have warned motorist that the latest cold snap is a magnet for car criminals.

Inspector Roy Watton says: “On Sunday 28th December, shortly before 6.00pm a vehicle was taken from outside a property in the Salisbury Avenue area of North Belfast.

“Details of the car were circulated to police officers across Belfast and the vehicle was spotted on the Crumlin Road and then the Woodvale Road.

“As the vehicle was moving along Cooper Way, officers deployed a stinger, to slow the vehicle and bring it to a stop.

“The vehicle was subsequently recovered in McQuillan Street.

“In the early hours of Monday 29 December, shortly before 2.00am it was reported that a silver Toyota Yaris was taken in a creeper burglary from a house in the Sunnigdale Park area of North Belfast.

“The vehicle which has the registration WEZ 6939 drove off in the direction of the Cavehill Road and is still outstanding.

“I would appeal to anyone who may have information relating to either of these incidents to contact detectives at Woodbourne on 101.”

Inspector Watton added: “I would also encourage all motorists to pay close attention to items that they leave in their car on open display.

“Recently, there have been a number of thefts of items from vehicles in the Sorella Street area of West Belfast.

“It only takes a matter of minutes for an opportunistic thief to break a car window and lift any valuables from the passenger seat or back seat and walk off.

“Again if anyone has information relating to these thefts, please contact detectives at Woodbourne on 101.”