SANTA REVEALS OTHER REINDEER ARE JEALOUS OF ‘RUDOLPH SELFIES’! 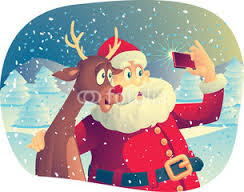 EXCLUSIVE: SANTA has exclusively revealed to Belfast Daily that the other reindeer are unhappy that everybody wants their picture taken with Rudolph.

Rudolph is arguably the most famous and most popular of all Santa’s reindeer and has regularly made the headlines over the years.

However, in a candid interview with our female correspondent Holly Mistletoe, Santa revealed that the demand for ‘selfies’ with Rudolph has put the other reindeers’ NOSES out of joint.

Santa told Belfast Daily: “Unfortunately the issue of discontent between the other reindeers and Rudolph has resurfaced again this year.

“In the past Dasher, Dancer and Prancer were unhappy at what they felt was bias towards Rudolph in many sections of the media.

“He was at the centre of many songs and the public did have a genuine fascination with him.

“I explained to the other reindeer back then that I value them all equally and need them all pulling together every year to make sure we get the job done.

“They realised it wasn’t Rudolph’s fault and they all became friends again.

However, the demand this year for ‘selfies’ with Santa and Rudolph prompted an angry reaction from the other reindeer.

“We have hundreds of visitors every year, but this year everybody wanted ‘selfies’ with me and Rudolph.

“It really annoyed Donner and Blitzen, and when Rudolph told the other reindeer he was on snapchat it just seemed to make the situation worse.

“I had to call an emergency meeting and sort out all the issues that had resurfaced.

“I reminded them of the really important job we have to do and there is no time for us to be arguing over petty things.

“Thankfully the reindeer realised I was right and put their envy and jealously to one side, I also made Rudolph delete his snapchat account, he has enough on his plate without any other added distractions.”

Santa also said preparations are going well and he is looking forward to the big day.

“The sleigh is half-full at the minute, so progress has been good, we had a test run earlier and it went smooth and we’ll have another later today.”

Santa didn’t say where he was going today but it’s expected he’ll fly over Northern Ireland to check up on everybody before he delivers all the presents.

He advises all children to get to bed early in case he gets a tail wind and he arrives sooner than they expect.