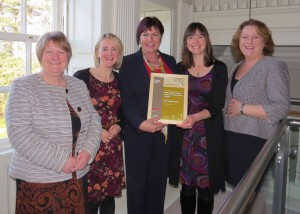 THE Rock Detectives, an event which saw budding young geologists take part in environmental based learning activities across counties Fermanagh, Cavan, Leitrim and Sligo beat a staggering 400 other events to claim the title of ‘Best Children’s Event’ at the Heritage Week Awards 2014.

Organised by the Border Uplands Project (BUP), the Rock Detectives beat off stiff competition from hundreds of other competitors to stake their claim on the much coveted prize.

The events which were completely free took place in counties Cavan, Fermanagh, Leitrim and Sligo and were aimed at children aged 4 to 12 years old.

The Border Uplands Project is a joint venture between ICBAN, Fermanagh District Council and the County Councils of Cavan, Leitrim, and Sligo which will create much needed outdoor access, recreational and amenity infrastructure in the scenic uplands of the region. The Project is funded under the European Union’s INTERREG IVA programme and managed by the Special European Union’s Programme Body (SEUPB).

The Rock Detective Clubs were designed to encourage children and their parents to discover places that are rich in geological, archaeological and cultural heritage and a key objective of the programme was to promote, strengthen and stimulate interest and pride in the unique heritage of the region.

Children from all over attended Rock Detective Clubs at the Marble Arch Caves in Co Fermanagh, Cavan Burren Park in Co Cavan, Sliabh an Iarainn in Co Leitrim and Streedagh Beach in Co Sligo. The children took part in various activities including digging for fossils in glacial mud, making their own toothpaste with calcium carbonate and creating their own fossils using plaster of paris and moulds.

Una Collier, Border Uplands Project Officer explains why the BUP was delighted to pick up the award:

“We are absolutely thrilled to pick up the award for Best Children’s Event for Heritage Week 2014. National Heritage Week is celebrated in 40 countries all over Europe so to receive such a celebrated award is just fantastic.

“The Rock Detective Project was created to educate young children in a fun and exciting way about the environment that we live in today. The counties involved boast stunning landscapes and we are so pleased that through these clubs we could communicate to children the wealth of fascinating geological facts that are just waiting to be discovered.”

Una continued:  “In total, 137 children took part in the initiative and we had fantastic feedback from them and also from their parents so this award is the icing on the cake.”