SANDWICH MAKER IN THE DOUGH AFTER SCOOPING £100K ON SCRATCHCARD 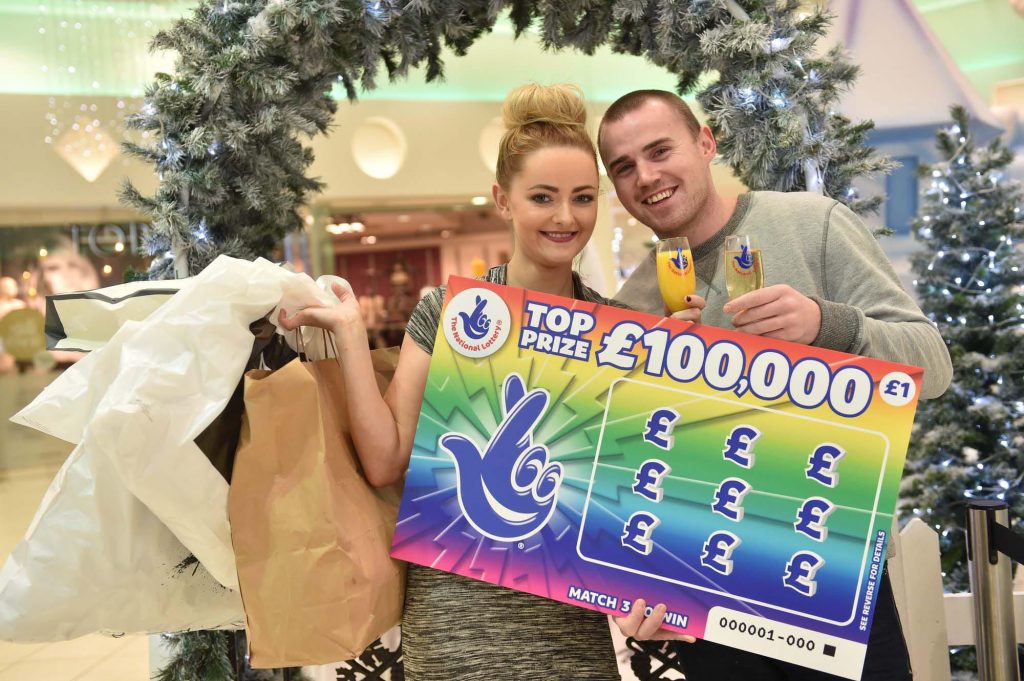 Lauren McLarnon (23) from Newtownabbey went on a celebratory shopping trip with her partner, Michael Mullen (25), after she won a staggering £100k on a National Lottery Scratchcard

A woman from Newtownabbey has won £100k after buying a National Lottery Scratchcard.

And Lauren McLarn0n bought her winning card at her local shopping centre, Abbeycentre, where she also works in O’Brien’s Sandwich Bar.

Part-time coffee shop worker, Lauren McLarnon who has one son (aged 3), and is expecting her second child next year with her partner, Michael Mullen (25), is looking forward to an extra special Christmas this year thanks to her life-changing win.

“I went to Easons in Abbeycentre with my friend to buy a few things and whilst in the queue waiting to pay I thought, on a whim, that I’d see if I had enough change to buy a Scratchcard.

“After rummaging around in my purse I managed to cobble £1 together in small change and bought the £100k Rainbow Scratchcard. I very rarely buy Scratchcards so I never in a million years expected to win.”

After revealing the matching three amounts Lauren was in total shock at her good fortune and asked her friend to double check the Scratchcard just in case.

“So I asked my friend and the lady who works behind the counter in Easons to double-check it. After they hugged and congratulated me, we all started jumping up and down, I finally realised that yes, it was true!  I just won £100,000.”

Lauren, who has two sisters and one brother, eight nephews and one niece, is looking forward to a wonderful family Christmas with her son and partner, Michael.

She explained: “As there are so many of us to go around at Christmas time we normally do Secret Santa but this year I can afford to get all my nephews and niece a gift which is amazing.

“I intend to use most of the money as a deposit on a house and I want to take my son to Disneyland, however as I’m pregnant it’ll have to be Disneyland Paris – but I’m sure he won’t mind!”