BREAKING WEATHER NEWS: TWO PEOPLE SAVED AFTER BEING SWEPT OUT TO SEA BY HIGH WINDS 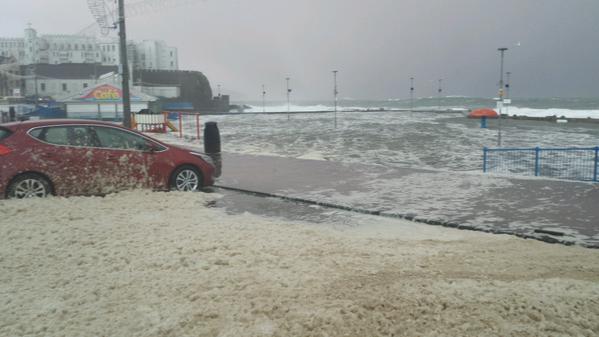 The heavy waves lash Portstewart as it is ‘weather bombed’

TWO people are lucky to be alive after being swept into the sea today.

It happened in wind and rain battered Portstewart as a so-called “weather bomb” lashed the coastline.

The jogger and dog walker were on the beach when the “unusually high” waves swept them out.

However, they luckily managed to scramble to safety.

“Just witnessed a second person get washed away and only just escape to safety,” said the National Trust’s Portstewart Strand Twitter feed.

“We can not stress this enough. PLEASE STAY AWAY FROM THE BEACH.”

Severe gales of up to 81mph have been recorded as the rapid cyclogenesis – a deep low pressure system known colloquially as a weather bomb – moves slowly eastwards between Scotland and Iceland.

Waves 45 ft high were recorded off the Donegal coast at midday.

Beaches and seafronts at Benone, Portstewart, Ballintoy and Ballycastle have all flooded and safety warnings have been issued.