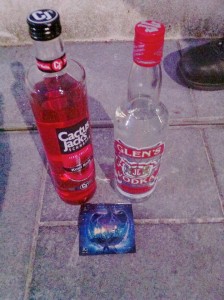 IT’S good news for Northern Ireland’s pubs, but bad news if you prefer a tipple at home.

For DUP Health Minister Jim Wells says he plans to put a minimum price on alcohol.

Publicans are already welcoming the move by Minister Jim Wells, who is also getting the backing of another DUP Minister Mervyn Storey for the move.

And publicans say it could end the sale of cheap booze in supermarkets with research showing that 20% of drinkers actually consume 70% of all drink sold.

“For too long, we have seen the damage caused by the proliferation of cheap drink in society and it is time that pricing was tackled in a serious way,” said pubs representative Colin O’Neill.

“Alcohol is a restricted product for a reason and it is imperative that we all take measures to ensure it is promoted and sold responsibly. The pub industry will continue to work with government to ensure that alcohol is sold responsibly and at a realistic price.”

“The level of harm caused by excessive alcohol consumption in Northern Ireland is staggering,” said Wells.

“The total cost to the Northern Ireland economy is estimated to be as high as £900m per year, with the burden to healthcare alone costing up to £240m per year.

“We owe it to those individuals who drink heavily, and their families, to do something about this.”

Research carried out by the University of Sheffield demonstrates that minimum unit pricing (MUP) is a targeted measure, having a modest impact on moderate drinkers but a much greater impact on hazardous and harmful drinkers who make up around 20% of the population, but drink almost 70% of all the alcohol consumed in Northern Ireland.

Social Development Minister Mervyn Storey said: “I share the health minister’s concerns in relation to alcohol misuse being a major public health issue and, having read the Sheffield report, I am in full agreement that minimum unit pricing should be adopted as the preferred policy option for Northern Ireland.”

But the plans could run into a legal challenge. Supermarkets have already stalled similar plans in Scotland through a European court case.

The case has been taken by the Scottish Whisky Association.