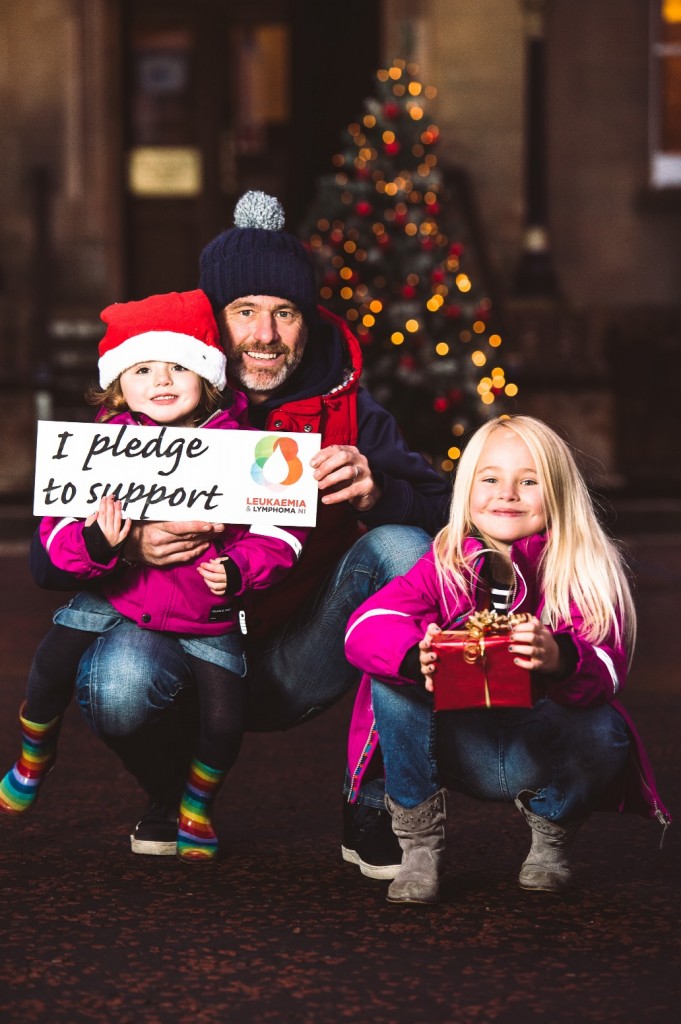 MAKE A PLEDGE… Leukaemia survivor Tony Miskelly from Bangor joins his daughters Freyja (6) and Emme (2) to ask people to support Northern Ireland’s only blood cancer research charity Leukaemia & Lymphoma NI as it marks the end of its 50th anniversary year.

BANGOR man Tony Miskelly has put out a plea urging people to support Northern Ireland’s only blood cancer research charity Leukaemia & Lymphoma NI as it marks the end of its 50th anniversary year.

Tony was diagnosed with childhood acute lymphoblastic leukaemia (ALL) and underwent aggressive chemotherapy and radiotherapy before having a bone marrow transplant.

In the 1990s when he was diagnosed, the chances of surviving a childhood leukaemia were slim, particularly for those in the older age bracket like Tony at age 21, and he believes he would not be alive today if it wasn’t for research charities that dedicate time and money to help discover the causes and cures of blood cancers.

Tony hopes the Northern Ireland public will show its support for the charity by coming along to make a pledge to support its work at the Giving Tree in Belfast Christmas Market on Thursday December 4 between 10am – 1pm or by donating to help fund its research programme.

When Leukaemia & Lymphoma NI was first founded 50 years ago, those suffering from childhood leukaemia, had a zero chance of survival, now 85% of those diagnosed survive and this is down to scientific research.

Tony is now the second-longest living bone marrow transplant survivor in Northern Ireland and is also a proud father to two young girls, aged six and four, having been told he may never have children due to his treatment.

“Being diagnosed with leukaemia was incredibly hard as the survival rates at the time were so low.  If it wasn’t for scientific research and the money of those that fundraise to help support this research, I may not be alive today,” said Tony.

“I’m extremely supportive of Leukaemia & Lymphoma NI and the work the charity is doing to try and find a cause and cure for blood cancers, as well as the research it is conducting into treatments that will help make the lives of those suffering from the disease more comfortable.

“More can be done to combat this devastating cancer and I would urge people to donate or pledge their support to the charity on December 4 at the Giving Tree.”

Patron of Leukaemia & Lymphoma NI Professor Jim Dornan, who also suffered from leukaemia, believes it is vital to get the message out there about how research can and has saved lives.

“In the past, being diagnosed with a cancer was a near certain death sentence but now many forms of it are treatable and people can survive and it is all down to scientific research.

“We’ve been conducting research into blood cancer for the past 50 years and as a local charity, we only raise money that supports research in Northern Ireland with the aim of gaining an understanding of how the disease develops and how to improve the outcome and quality of life for all of those affected.

“There has been a massive improvement in the survival rates of those that suffer from blood cancers today compared to when we first started 50 years ago and it is our dream to help increase this survival rate in the future.

“I hope people will come along to the Giving Tree at Belfast City Hall and pledge to support us, no matter how big or small that pledge may be.”

Leukaemia & Lymphoma NI will be at the Giving Tree at the Belfast Christmas Market on Thursday December 4 to raise awareness of the charity.  Visitors to the market and supporters of the charity are invited to come along between 10am – 1pm to write a pledge for the charity to hang on the tree.  The pledges can be for anything you feel you can contribute including time, talent or a treasure and will be uploaded to the Giving Northern Ireland website.

To find out more about Leukaemia & Lymphoma NI visit leukaemiaandlymphomani.org, follow the charity on Twitter@LAL_NI or like them on Facebook at facebook.com/LAndLNI.  You can also donate to the charity by texting LLNI14 £5 to 70070.