CHAMPAGNE ALL THE WAY AS MERRY MARY SCOOPS £12.9M ON EUROMILLIONS 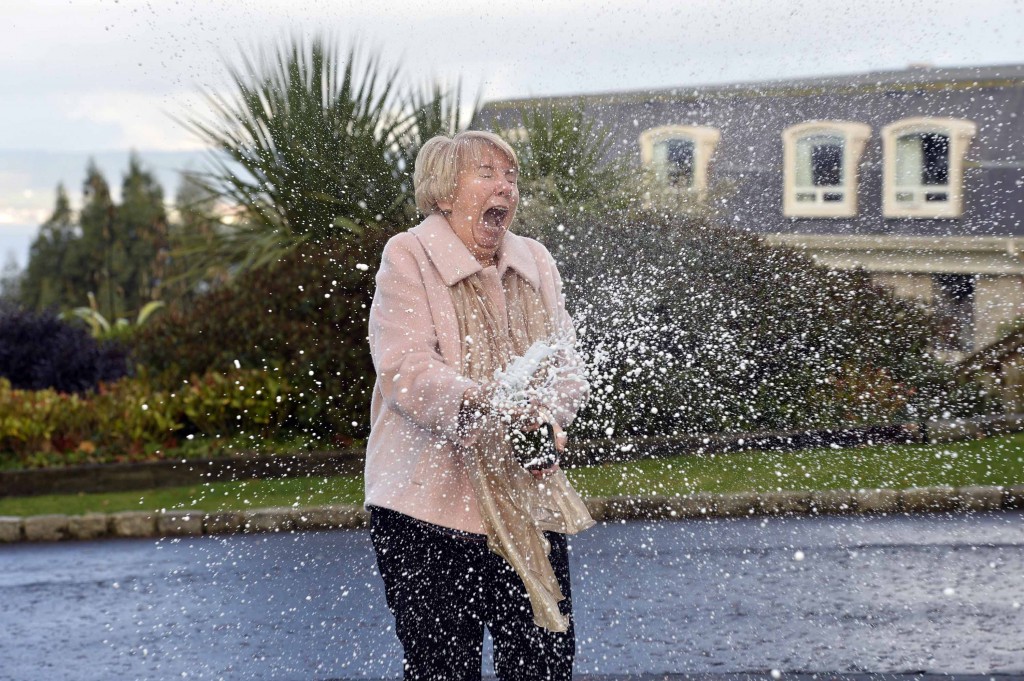 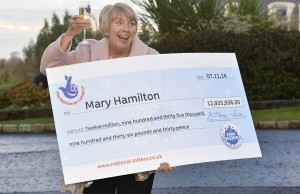 A Belfast pensioner and her husband are singing all the way to the bank after becoming Northern Ireland’s latest lottery millionaires.

Mary Hamilton, along with her husband Alexander, from Newtownabbey, Co Antrim, has been collecting money from customers every day for more than 30 years as part of the couple’s daily jobs.

But today she collected an amount beyond her wildest dreams after scooping a massive £12,935,936.30 jackpot in the Euromillions draw on Friday November 7.

Working for Belfast furniture store Bannons, Mary (65) and Alex (67), who celebrated their 40th wedding anniversary in July this year, call daily on customers who have bought their furniture on account to pick up their regular payments.

Now Mary has picked up more in one day than the couple have collected between them in a career that spans 35 years.

And now, Mary has vowed to reward all their faithful customers who have ‘kept them in a job’ for all these years.

The news of Mary’s jackpot win comes in a milestone week for The National Lottery which this week celebrates 20 years of changing lives in Northern Ireland.

“I’ve been playing the lottery since it started 20 years ago and while I always thought there was a chance of winning a few thousand pounds one day, I never dreamed of winning anywhere near this amount,” said Mary, who buys a ticket for Euromillions and for Lotto every weekend.

“For the first 10 years or so, I always did the same numbers week in week out and picked up a few wins over the years but nothing worth talking about.  Then I made the brave decision to switch to Lucky Dips and I suppose the rest is history.  To be honest, I may not have won much before now but I’ve always considered myself a lucky person to have my health and an amazing family,” she added.

Mary found out about her win when she called into the Jet filling station on the Shore Road last Friday night (November 14) to purchase tickets as she normally would.

“Every week, I call in to buy a couple of tickets and get my previous week’s tickets checked, while I make myself a cup of tea in-store,” she explained.

“When I went with my tea to pay for everything, I was told that they couldn’t pay my money over the counter and I had to call the lottery number on the back of my ticket.  The shop was quite busy and people quickly started to talk about me being a big winner.

“Someone even checked the numbers on his phone and within minutes, we knew that I had struck the jackpot so I was taken into the store to sit down, call my husband Sandy and try to come to terms with what had just happened.  My legs were so weak that I couldn’t walk.  Sandy came to the store, we hugged and then he drove us home,” added Mary.

Mary’s news is maybe not such good news for furniture company Bannons which is now losing two good employees with immediate effect.  Mary had nothing but praise for her former bosses.

“We started working with Bannons about seven or eight years ago and they’ve been the happiest years of our working lives,” said Mary.  “The owners and management have treated us very well and we’ve also made a load of friends from customers on both sides of the community on our daily runs across Falls Road, the Shankill, New Lodge, North Queen Street, Rathcoole, Ballyduff, Monkstown and Newtownabbey.

“In fact I always said to our customers that if I ever won the lottery, I would see them right.  And I intend to keep my word and do just that.  You could call it a thank you for keeping us in a job,” she continued.

So what next for Mary and Sandy?  What will they do with their new found wealth?

“Spend it!”, says Mary emphatically.  “I want to make life as comfortable as I can for ourselves and our family and friends.  I’d like to help both sides of the community and also do my bit to help the local economy which has had it tough lately.”

Mary said her first purchase will be a new mobile phone while the couple are looking forward to a holiday soon and to travelling around the world.

Plans to move from their Newtownabbey home are already under way.