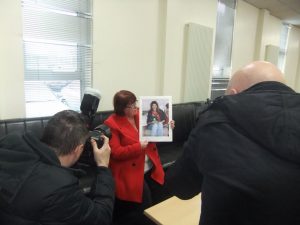 MISSING Leonita Teague has been found and has been reunited with her family.

The 20-year-old had gone missing in north Belfast a fortnight ago without trace, which caused police and her family great concern.

Commenting Detective Chief Inspector Gary Reid said: “Police would like to wholeheartedly thank members of the public and all of the media that assisted in the process of circulating appeals.

“This has resulted in Leontia being successfully located this morning in the Bangor area.  Leontia is safe and is currently being reunited with family.”

Leonita had disappeared on October 30  after leaving Thorndale Family Centre in a distressed state and calling at her grandmother’s house to collect some belongings.

Her grandfather Nora Darling issued a heartfelt appeal on Wednesday for Leonita to contact the family to know that she was safe.