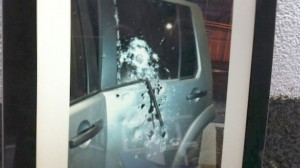 The security operation in the Circular Road/Creggan Heights area is continuing and a number of homes remain evacuated following Sunday night’s bomb attack on a police mobile patrol.

Up to as many as 100 people were involved in the attack during which petrol bombs, bottles and stones were thrown at police.

Three teenagers, aged 13, 14 and 16, were arrested and remain in police custody.

PSNI Area Commander Chief Inspector Tony Callaghan appealed to people with influence in the community to do what they could to dissuade young people from getting involved in such behaviour.

He added:.  “We realise the disruption this operation has caused to the local community, many of whom have been out of their homes for some time.

“We appreciate their understanding, patience and co-operation. We know people understand that our priority must be their safety and the safety of our officers.

“We also have to carry out a scene examination – this is vital but often a painstakingly slow process – and one which will continue.

“It is imperative that we make every effort to secure any evidence from the scene that could potentially lead to people being charged and brought to justice.

“We know the public want us to investigate this in a thorough and professional manner.

“Police would again like to thank the community for their patience while we work to identify the persons who have caused this disruption in their community. We are determined to put these people before the courts.”