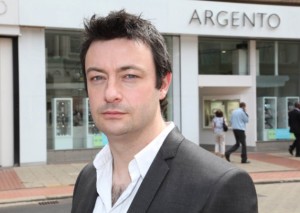 Argento boss Pete Boyle offered £15,000 for the return of his stolen Christmas stock

DETECTIVES have detained two men over a £80,000 jewellery heist this week.

Company boss Pete Boyle had offered a £15,000 reward for the return of his Christmas stock.

As part of an intelligence led operation this evening, two men aged 41 and 63 on suspicion of burglary following a number of searches in the Craigavon area this evening.

The 63 year old man has also been arrested on suspicion of a number of drugs related offences.

Temporary Detective Inspector Jill Duffie said:” Four searches were carried out at separate addresses this evening in Craigavon and two men have been arrested. They are currently in custody helping us with our enquiries.

“I would continue to appeal to anyone with any information to contact detectives in Lurgan on 101.

Information can also be given anonymously through Crimestoppers on 0800 555 111.”

The Christmas stock was due to be delivered this week to the firm’s 22 stores across Northern Ireland, including the Portadown and Rushmere branches.

Argento owner Peter Boyle has offered a £15,000 reward for anyone with information that leads to the recovery of the missing items.