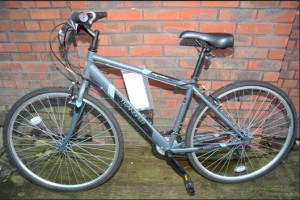 POLICE in north Belfast have linked a stolen bicycle to bank robbery suspects.

It is part of continuing enquiries into an armed robbery at a bank in the Shankill Road area on October at approximately 9.40am where culprits made off with a sum of cash.

As part of their enquiries, Detective Sergeant Andrew Madden, CID Tennent Street, is keen to establish the owner of an “Apollo Transfer” bicycle.

This was located by police on the morning of the 6th October in south Belfast after responding to a report of a house having been burgled and a private vehicle stolen from the driveway.

Detective Sergeant Madden said: “I would ask anyone who recognises this bicycle or who knows anything about this incident to contact CID at Tennent Street Police Station on the non emergency number 101.